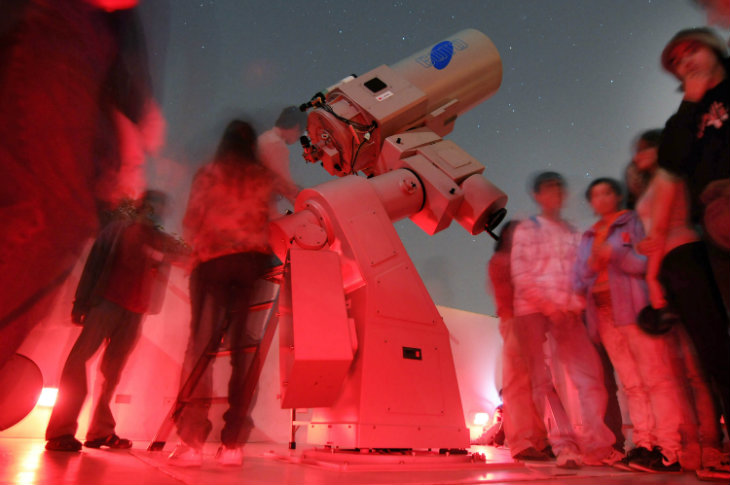 The Department of Astronomy came into being in 1965. The arrival of other international observatories within the country prompted the creation of a degree program in astronomy, which prepared specialized scientists within the area of study.

Since that time, the department has had its installations in Cerro Calán, in Las Condes neighborhood, where the Observatorio Astronómico Nacional (OAN) also operates. It was founded in 1852 and held as a part of the Universidad de Chile since 1927. A large number of the instruments that shaped the department were part of the OAN, among them, two antique telescopes: the German "Heyde" refractor and the French "Gautier".

Thanks to a Japanese donation in 2002, the DAS relies on a modern Cassegrain telescope that serves in educating undergraduate and graduate students as well as aiding in scientific diffusion of astronomy through guided visits from institutional and private entities.

Presently, the department also runs an image-processing center where researchers carry out the reduction and analysis of data through the use of an online office network.

Since its beginnings, the department has been known for its academic excellence, educating top-notch scientists in undergraduate and graduate areas of study. The department has outstanding professors and researchers, mutual agreements with prestigious international astronomy centers, modern installations and important research work.
The department consists of the following programs:

DAS astronomers work in a wide variety of research and project areas, not only for the comprehension of the science, bus also towards the development of related technologies. The following are some of the most important research initiatives:

An important aspect of the Department of Astronomy's labor is the development of various educational and scientific diffusion activities by the academic staff and the students, focused to the entire community.